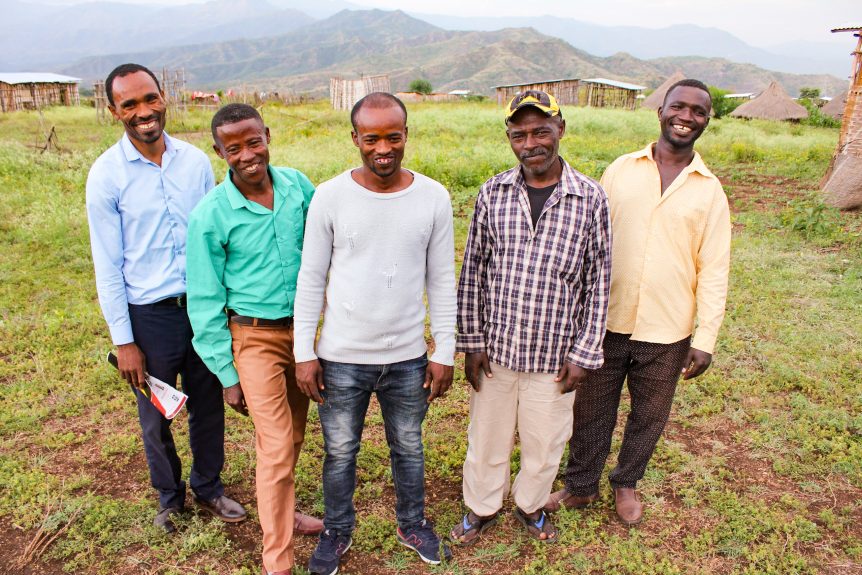 Malota (top photo, far left) trudged up the rugged dirt road, eager to meet the handful of believers at the top of the hill. The lanky Ethiopian church planter had recently taken Global Church Movement’s MC2 training, designed to help people plant churches that multiply, and he had begun to apply the training in the city of Arba Minch. He’d already planted one church before the training, which he named “Bethel,” and now with the training looked forward to multiplying his efforts.

At the top of the long hill, nestled beneath rugged mountains and looking down on one of Ethiopia’s Rift Valley lakes, sprawled a new development. People from town were moving up there to buy land and build their own house, while people from the country found it a good landing place when they came to the city looking for work. Now some 10,000 people were living on this plateau overlooking Arba Minch, one of the important cities in Ethiopia’s Southern Nations, Nationalities and Peoples region. Seven believers had found each other and begun meeting informally. One had been a member of Bethel Church and asked if Malota could come up and lead the Bible study.

Malota agreed, but he had bigger dreams than simply leading a Bible study. He taught principles from the MC2 training like “Prayer, Care, Share,” and encouraged the people to pray for their neighbors, care for their needs, and then share the gospel with them. The little group began to grow, and Malota trained one of the group members, Isak, to lead this second-generation church at the top of the hill.

“People were excited about coming to Christ,” says Isak (top photo, middle), “because they could see [the Christian community] had a strong fellowship and love for one another.” Some made first time commitments to Christ, some were already believers. For example, Leku, one of the men attracted to the growing fellowship, had become a Christian years earlier but had never grown spiritually. Leku (top photo, 2nd from right) flourished under Isak’s leadership, and it soon became clear that God was giving Leku gifts of leadership as well.

As the church on the plateau grew, Malota began casting vision for multiplication. He strategically mapped out the area and suggested a systematic approach.  “Let’s plant four new churches,” he said. “We’ll send somebody half an hour walk (about 3 kilometers), to the north, the south, the east, and the west. At each place we’ll do Prayer Care Share and plant a new church. Then we’ll repeat the process until the whole area is reached!”

Leku took responsibility for one of these four churches and people began to turn to Christ. Within a year this third-generation church had launched two new missional communities. “I am growing leaders who have the responsibility to take new areas and start new churches,” says Leku, a man in his 50s who works in construction. “I learned how to do this from the GCM training, which Malota passed on to me. I take as my model the book of Acts.”

By fall of 2019, just two years after Malota began teaching the little Bible study, 12 new churches had been planted at the top of the plateau, each of which had one or more daughter churches. The seven believers had grown to involve more than 1200 Christians in the whole network.

The city had long opposed this evangelistic effort, since the little group did not belong to the dominant religion, and refused to let them buy land to build a church. Eventually so many people had trusted Christ, with such powerful changes in their lives, that the city relented and let them buy some land and build their church.

Today the second-generation church that Malota planted, with its corrugated roof and straw-mat walls, seats 200-300 and serves as the mother church for the network of new churches and groups at the top of the hill.

As the body of Christ began to grow on the edge of Arba Minch, Malota turned his attention to a new area a couple of hours from the city. A people group known as the  Male (Ma-lay) lived there. The Male were animists, and in this region, untouched by the gospel. Malota took some of his second-generation leaders and visited tribal leaders who spoke Amharic, the Ethiopian national language.

The missionary band shared the gospel and led these local leaders to Christ.  Malota taught them to reach their own people and plant churches, using the same strategy of mapping the area, then sending people a half hour walk to the north, south, east and west to plant new churches. These new Male believers shared the gospel with their friends who did not speak Amharic and began planting churches in their own language. Today 12 churches have sprung up in this region, in the Male language, spread over five generations.

Malota’s denomination, the Kale Hiwot Baptists, now plan to bring  a health clinic to this Male area and even establish a Bible school to give the leaders further training.

Story and Photos by Bill Sundstrom